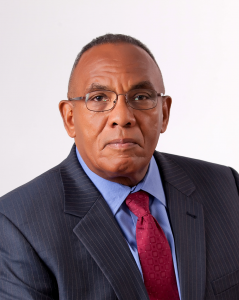 Morrison graduated from Percy L. Julian Elementary School in Phoenix, Arizona in 1957 where he excelled in the classroom as an honor student and on the field of play as an outstanding athlete. Morrison later attended South Mountain High School in Phoenix, Arizona where he developed a highly respected reputation as a leader in academics, athletics, and student affairs. Morrison graduated from South Mountain High School in Phoenix in 1961 as his class co-salutatorian for outstanding academic achievements while also excelling as a 3-star athlete in football, baseball, and basketball. Morrison earned various All-State and All-America honors for his athletic success at South Mountain High School. Morrison was named Homecoming King while also being selected to represent the state of Arizona at Boy's Nation in Washington, D.C. based upon his leadership in student government.

While at Stanford, Morrison made history again when he accepted the invitation to join the prestigious Delta Tau Delta fraternity, becoming the first Black man to become a member at Stanford University. Morrison enjoyed success on the football field at Stanford University during his freshman and sophomore years; however, he suffered a career-ending knee injury during his junior year. Morrison displayed courage and grit by remaining at Stanford, graduating in four years with a degree in Economics and a dual minor in Political Science and Mathematics.

Following graduation from Stanford University in 1965, Morrison attended the University of Arizona School of Law before making another courageous decision by volunteering to join the United States Marine Corps and ultimately served the United States of America as a Lieutenant during the Vietnam war. Morrison received an honorable discharge from the Marine Corps following another injury to his knee.

Upon returning to Arizona from his military service, Morrison joined Valley National Bank of Arizona in February of 1968 and spent the next 47 years working in the banking industry for Valley National Bank, Bank One, and J.P. Morgan Chase until his retirement as Senior Vice President in 2015.

Morrison peacefully passed away in Chandler, Arizona on May 4, 2022, surrounded by family and loved ones.

Morrison's intelligence, wisdom, work ethic, candor, love of a great meal, giving spirit, and laugh will be missed by all who knew him. Morrison deeply loved God and accepted Jesus Christ as his Lord and Savior.

The Morrison Elliott Warren Memorial Fund with the Arizona Community Foundation has been established to accept donations to issue scholarships to deserving high school students from Arizona who attend Stanford University.