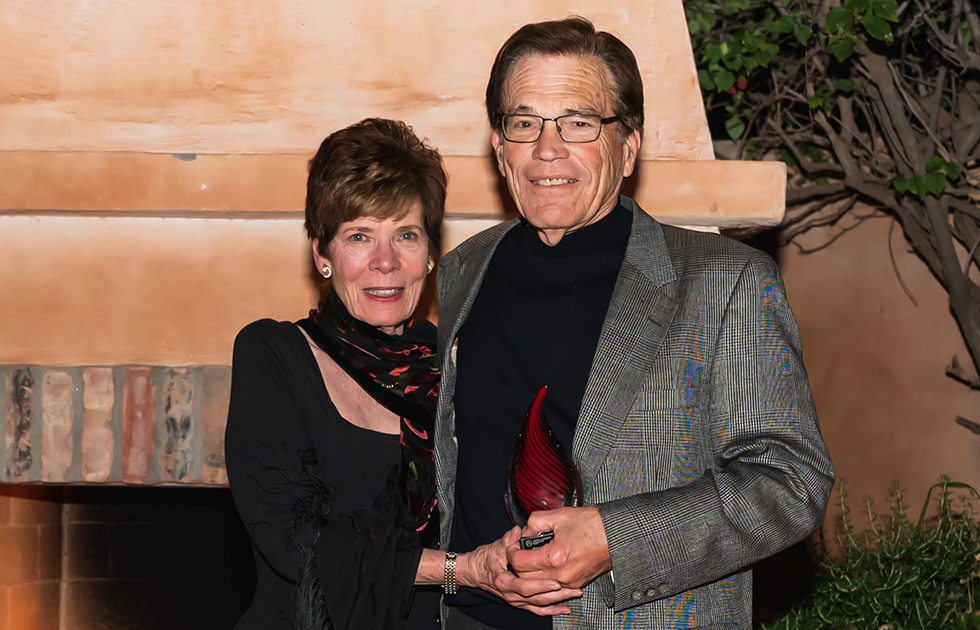 Bill and Susan Cammock enjoyed successful careers in Ohio before retiring to Sedona. They quickly adopted their new town as their own and looked for ways to give back and make an impact. They made donations to educational and animal welfare causes--and to a new organization their neighbors told them about, the Sedona Community Foundation (ACF of Sedona’s name at the time).

The community foundation intrigued this entrepreneurial duo. By using the sophisticated financial tools offered by the foundation, they could not only keep their dollars local but potentially make an impact far beyond what simple donations could do. Although the foundation was small at that time, both Bill and Susan could see the untapped potential.

They opened a Donor Advised Fund and became Legacy Donors. Susan joined the Board of Advisors with an eye toward developing the emerging organization. She worked tirelessly to both build assets and improve business practices. She was instrumental in establishing the Miracle at Seven Canyons golf event as a collaborative fundraising effort for the community. Susan also worked hard to involve the business community in giving back through the foundation.

“ACF has come a long way over the past 30 years," says Steve Seleznow, President & CEO of ACF. "Bill and Susan have been instrumental in ACF of Sedona’s sustainability, and now thriving success. They spoke the truth always. And they stood up and spoke out for the right things when facing difficult and divisive issues. They were never daunted by challenges and were willing to lead when their leadership was needed most. Leaders are best judged by what they leave behind. The leadership of Susan and Bill Cammock has laid the groundwork and set the foundation for continued philanthropic support for generations to come for the Sedona region and all who call it home.”

While Susan worked with the internal leadership as a volunteer, Bill joined the Board of Advisors and started formulating plans for what would become the Pathway to Careers Scholarship Fund.

Bill had received a scholarship for college and was passionate about extending the gift of education to others. But, as is typical of this couple, he looked for strategic ways that he could make the biggest impact.

Living in Sedona, it was hard not to notice the shortage of skilled trades people. Getting people who are struggling financially into high-paying trades seemed to be the ultimate win-win solution for an impactful education program. While most scholarship funds focus on university education, Bill set out to provide resources for this neglected area of need. And of course, the Cammocks set out from the start to do it in a big way.

Taking inspiration from the Pat Marr Memorial Scholarship Fund at ACF, Bill and Susan partnered with their friend, Chuck Marr, and set out to create a significant, semi-endowed fund to help put local people through career and technical education programs. Instead of setting up a typical scholarship fund, they created a public field of interest fund at ACF, allowing all philanthropists in the region to participate.

The Cammocks and Chuck Marr made significant investments in the fund to get it started. They then set out to actively build the fund through wider community philanthropic support. The Pathway to Careers Scholarship Fund is now one of ACF of Sedona’s flagship educational programs, helping numerous local families achieve dreams and escape from financial distress.

Bill and Susan are not only true philanthropists in every sense of the word. They helped to create systems and institutions that catalyze increasingly larger philanthropic resources for the community. Thank you, Bill and Susan! You have forever changed the charitable landscape of Sedona and the Verde Valley.