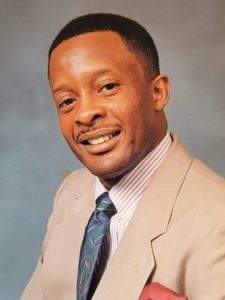 Vernon Horace Collins transitioned on January 15, 2022 from complications from sickle cell anemia. He was born in St. Louis, Missouri on April 4, 1954 to Charles and Susie (Nichols) Collins. He was the youngest of eight children. As a young boy he accepted Jesus Christ as his Lord and Savior and joined the Pilgrim Rest Baptist Church. Vernon was educated in the East St. Louis Public School System, graduating from the East St. Louis Senior High School in 1972. He earned his Bachelor of Science Electrical Engineering Degree from Southern Illinois University at Edwardsville and worked as an engineer for AVSCOM (US Army Aviation Systems Command), St. Louis, MO and later for Scott Air Force Base. After that he was self-employed as a designer and builder. He loved working with his hands and had tools all around his home. He even loved tinkering and fixing cars.

Sickle cell disease greatly impacted Vernon’s quality of life and ravaged his body. Sickle cell disease (SCD) is the most common genetic blood disorder in the United States impacting mostly Black people. In fact, one in 365 African Americans are born with the inherited blood disorder. It causes chronic anemia, acute painful episodes, organ infarction, chronic organ damage and depression which causes significant reduction in life expectancy. Although SCD was first discovered more than 100 years ago, the development of disease-modifying therapies has stagnated because of inadequate research funding. Faulty care and sluggish research are symptoms of what sickle cell specialists say is “the deplorable legacy of neglect and inequality of Americans with the disease.” Gifts to the Vernon H Collins Memorial Fund will support research, therapies and other treatment.