In Memory of Larry Lesko 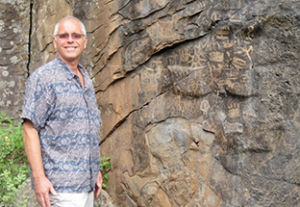 Lawrence Michael Lesko left this world surrounded by love at age 71 on Friday, June 12, 2020. Larry lived and worked in Williams and northern Arizona from 1978 to 2001, but never truly left his beloved canyon country.

Larry is remembered by friends and family for his easy smile, gentle spirit, generosity, and kindness. He stayed true to his principles of freedom, equality, social justice, preserving nature, and engaging in the political process.

Larry had an adventurous spirit and hitchhiked west from his Pittsburgh, Pennsylvania home at age 18 to surf in southern California. It was during one of his many cross-country drives that he first encountered the Grand Canyon, beginning his love affair with the region.

Larry was working as a timber road surveyor for the Kaibab National Forest on the North Rim of the Grand Canyon when he decided to return to college in 1983. He obtained a degree in anthropology from Northern Arizona University in Flagstaff in 1985. That is where he met his wife, Teri, who had also returned to school as an archeologist. Larry and Teri married on the rim of the Grand Canyon on the Summer Solstice in 1986. They made their home in Williams and became a part of the community.

Larry also began his career as an archeologist on the Kaibab National Forest that year. He started a tribal relations program that set the national standard for collaborative relationships, engaged with volunteers, and pioneered the management of heritage resources in wildland fire operations. He backpacked and took river trips in the mountains, canyons, and rivers throughout the west. Wherever there was a campfire, Larry could be found strumming a guitar and leading a sing along.

In 2001, Larry moved to the Forest Service’s national headquarters in Washington DC, where he staffed the National Wildland Fire Leadership Council, bringing together state, federal, and tribal governments to address fire issues across the nation. He continued this work from Tallahassee after following Teri to the National Forests in Florida in 2009 and retired from the Forest Service in 2011. Larry eventually traveled to all 50 states and numerous countries, but he left his heart in Arizona.

Larry believed in the interrelationships of all beings and the importance of helping each other on life's journey. Larry was not religious but profoundly spiritual in his relationship with the world and its life forms. He was especially drawn to the native peoples of northern Arizona and found understanding by “walking the land together.” He loved mentoring youth on land ethics, especially the use of native plants and preserving history. This work can continue through his memorial fund by giving below.

Donations in Larry's memory will support the Greater Williams Community Fund, a component fund of the Arizona Community Foundation of Flagstaff.